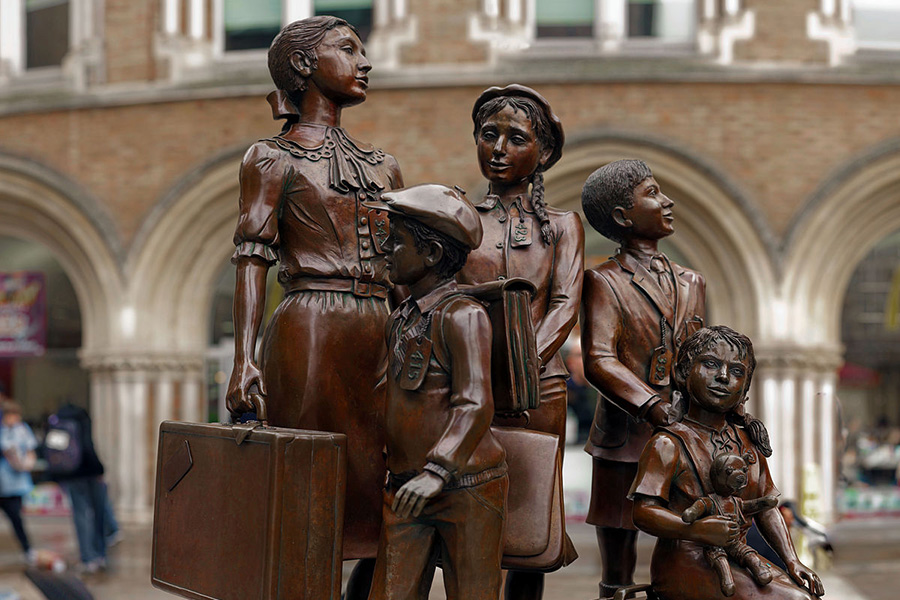 Travelers arriving at Liverpool St station in London see a memorial to the Kindertransport. In 1938 and 1939, ten thousand unaccompanied Jewish children were transported to Britain to escape persecution in Germany and Austria. They were  taken in by British families. Only a few were reunited with their families after World War II. But they were saved from the Holocaust.

I was reminded of the Kindertransport recently as I listened to BBC Radio’s Farming Today.

The first item was about visiting seasonal workers. One woman from the Ukraine said.

‘We were forced to work wearing the skin off our hands and feet until they bled as we were not allowed to wear gloves while picking the berries. There were very few toilets, wash basins and lounge areas. We didn’t eat or drink in our 10 minute break as we stood in line for the toilet…. When some people decided to protest against the working conditions they were punished by being suspended for a week.’

This year around the country asparagus growers are leaving their crop unpicked for lack of the pickers they need. Last year, the Economist tells us, 8000 tonnes of berries were left to rot for want of pickers.

Next there was an item about free range eggs. Producers have been warning retailers since February that many egg producers were in danger of going out of business in the face of rising costs. One commented that this nutritious commodity, produced with such care, was undervalued: a dozen eggs were selling for the price of a takeaway latte.

The next report came from a pig farm in Shropshire which was in the final stages of shutting down in the face of rising costs. ‘It is family farms like this one that will be  forced to close’ explained the proprietor. ‘You will still find pork on the shelves but it will be imported and it won’t be produced to the same welfare standards. ‘ The National Pig Association has warned that four out of five pig producers could go out of business unless Tesco paid more for its pork. It did acknowledge that several retailers including the Co-op, Marks & Spencer, Sainsbury’s, Aldi, Asda and Morrison’s had taken positive action.

The government has let it be known via press briefings that it wants to cut 90,000 civil service jobs. It has also talked about increasing the productivity of its civil servants by stopping people working from home. Meanwhile in the private sector 50 of the UK’s largest employers say they have no plans to require people to go back to the office. The evidence, unsurprisingly, is that significant numbers report that their productivity has improved and that they put in more hours when working from home. Respecting and trusting your staff is usually a good idea. So is enhancing their choices.

A HEALTH SERVICE NOT AN ILLNESS SERVICE

In an attempt to ease the cost-of-living burden the government now plans to delay its ban on multi-buy deals of junk food, and pre-watershed advertising.  Yet this short-term decision came in the same week that we learned new figures about the long term crisis facing the NHS. There are many causes, prominent among them the rising level of obesity. 28% of children now start primary school with a weight classed as obese. This rises to 41% in 11-12 year-olds.

I want to live in a country which is welcoming to strangers and refugees. One which will strike the right balance between short-term expediency and long term improvement; which, by its legislation and example, encourages all employers to treat their people with respect and creates the conditions in which companies can be more productive. A country which believes in and practises subsidiarity. This means devolving decisions to those best placed to understand and fix problems, a principle well expressed by Charles Handy in a blog called The Importance of Leaving Well Alone.

SAFEGUARDING THE FUTURE WHILE DEALING WITH NOW.

It is possible to combine short term responses to crisis with long term planning for a better future. In The Road to 1945 historian Paul Addison describes how, under Churchill and Attlee, our government achieved this during the Second World War. While the War Cabinet was focused on defeating Hitler, the thinking was done and foundations laid for the creation of the NHS, compulsory secondary education, decent town planning and many other building blocks of a more civilised society.

Doing the right thing so often brings its own rewards. Take Kindertransport child Vera Buchtal, later Dame Stephanie Shirley. She was so good at maths that her girls school could not cater for her. She went to the boys school and entered the fledgling IT industry. In 1962 she started her own business with other women, many of whom worked from home. In 1996 the FI group was floated on the London Stock Exchange and made millionaires of many of the women who had worked with Steve Shirley.

It is because I want to be proud of my country’s progress in these and many other aspects of quality of life, that I am playing a part with others in creating the Anthropy conference that will take place at The Eden Project, Cornwall, this November. The Jubilee seems a good time to revisit or explore the qualities that have made and will make us proud of our country.

Mark Goyder is the Founder of Tomorrow’s Company and Senior Advisor to the Board Intelligence Think Tank. He is one of the organisers of Anthropy which is taking place on November 2-4.