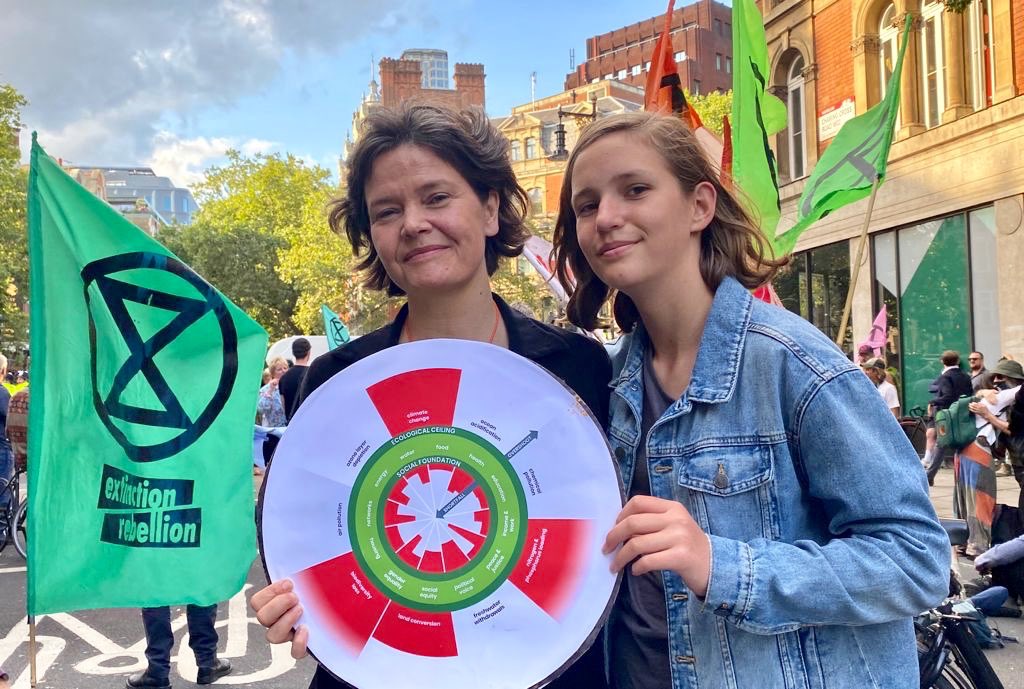 ‘The first principle of 21st century economics is to protect the life-supporting systems of the living world. That’s why I stand, with my daughter, with @XRebellionUK and all who rebel for life.’

The first principle of 21st century economics is to protect the life-supporting systems of the living world. That’s why I stand, with my daughter, with @XRebellionUK and all who rebel for life. #doughnuteconomics pic.twitter.com/6uYTAHvu1S

What is C21 economics?

Kate Raworth describes it in her book ‘Doughnut Economics’. Think of two concentric circles – just like the sort of doughnut that has a hole in the middle. As Raworth puts it:

‘Inside the inner circle is a social foundation of wellbeing that no-one should fall below….Outside it is ‘an ecological ceiling of planetary pressure that we should not go beyond’

EF Schumacher subtitled his famous book ‘Small is Beautiful’ as ‘the study of economics as if people mattered’. With Kate Raworth we can now add ‘particularly people of future generations’.

How does this overdue rethinking of economics affect the agenda in the boardroom?

Take house building.  In a C20 economy, it is rational for a house building company to measure its success by the number of housing units it has built, by the efficiency by which it has managed the input of materials and labour, and by the resulting profitability and return to shareholders. (Even by the twentieth century it is irrational and usually self-serving for the management of the house-builder to be measured and rewarded by the share price, but that’s another story!)

A national audit conducted by University College London in 2020 criticised ‘greedy’ house-builders and found that three-quarters of new homes constructed by large builders are of “mediocre” or “poor” design quality, with one in five so bad they should never have been given planning permission. Poorer areas were found to be 10 times more likely to get bad design

Take a look at the annual reports of house building companies. They contain words like ‘quality’, sustainability’ ‘listening to our stakeholders’ and even ‘thriving communities’. A commitment to work toward Net Zero is almost obligatory. Yet   look at the way they report to their shareholders. They focus on how many units of housing they have completed, with what profit outcome and impact on share price. They also prioritise the size of their land bank. There is little evidence that they have considered what it would mean to commit, as a priority, to the creation of thriving communities.

To do so would require a partnership approach. Take energy as an example. How many house builders have engaged in partnerships to plan a whole-community approach to energy supply? Organisations such as Repowering London are creating mechanisms by which local people could take control of their own energy supply and reduce their energy bills. (The success of this work was described recently on BBC Radio 4’s Positive Thinking episode on How to End Fuel Poverty.)

A C21 house builder would only offer share-based remuneration where that vested in periods of ten years or more, with clawbacks where it turned out that the community impacts of a development had been particularly bad.

A C21 board would only give the go-ahead to a development to begin when it was satisfied by the results of a detailed consultation and review, involving local authorities, and community organisations.

The company would maintain dialogue with such stakeholders throughout the development process. The industry would review the health of these new communities’ years later and feed back the lessons.

The company would identify neighbourhoods with particular needs and help them achieve their housing objectives. It would work with the Community Land Trust (CLT) movement to help create more local trusts, run by local people to develop and manage homes as well as other assets. (CLTs act as long-term stewards of housing, ensuring that it remains genuinely affordable, not just now but for every future occupier.).

In Westleton, East Suffolk, local people developed a plan to enable people to stay in the village as they got older. With the blessing of the Church of England, they envisaged building 20 bungalows and using the redundant vicarage building itself as a social hub for future residents. In 2020 East Suffolk’s planners turned the proposal down, citing implausible reasons that included the ‘historical significance of St Peter’s Church nearby’, ignoring the obvious point that housing the elderly and using the vicarage to combat loneliness might be more in tune with the best historical traditions of the church,  than opening the way for more  executive housing.

Imagine if a house builder had been on the look-out for such community-initiated schemes and worked with the community groups to help realise their goals.

A C21 house builder would see itself as the servant of communities, not as an investment machine whose output happened to be housing units.

To a current director this may sound utopian. In the twentieth century, it took decades for directors of tobacco companies to acknowledge the research that showed that smoking kills. Someone has to make a start to unravel conventional arrangements when these fail to meet society’s needs.

Yet once the possibility of a better, more human approach to business presents itself, how many directors really feel comfortable standing in the way of change?

Perhaps that is the new boardroom test. A member of your family – perhaps -one of your children or grandchildren has joined Kate Raworth and her daughter on an Extinction rebellion protest. Can you comfortably defend your current business model and its impacts to that young person?

Mark Goyder is Senior Advisor to the Board Intelligence Think Tank. He is Founder of Tomorrow’s Company and Co-Author with Ong Boon Hwee of Entrusted: stewardship for responsible wealth creation.